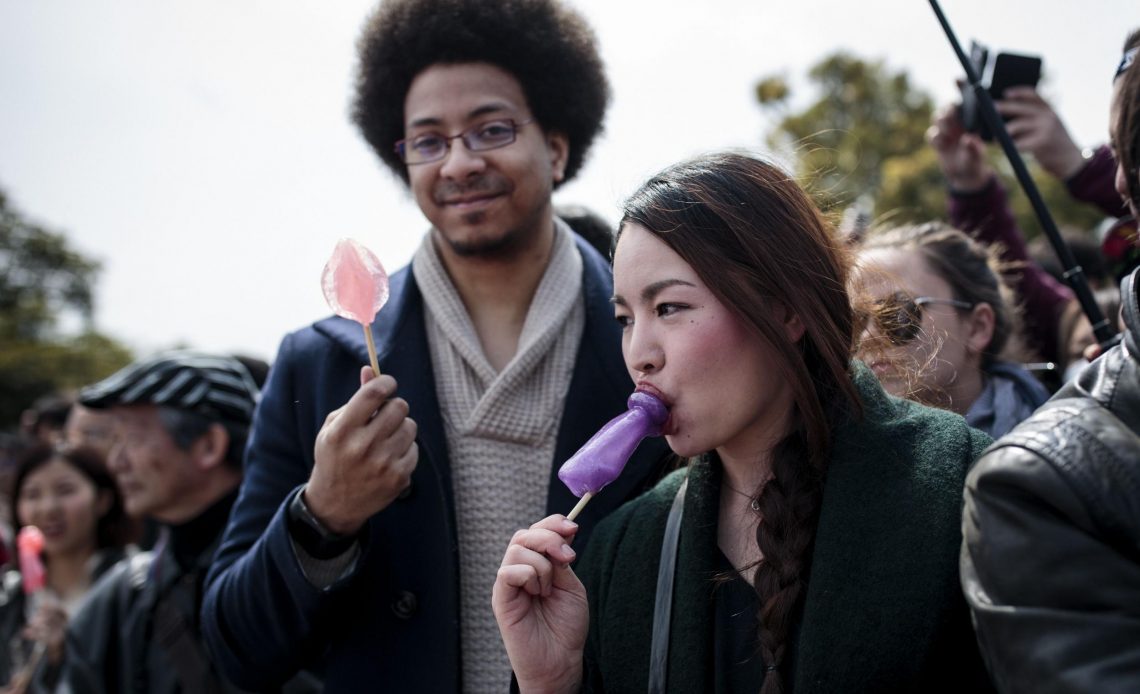 Here in the US, we’re no stranger to parades. We have them when sports teams win championships, to celebrate the holidays, and for anniveraries of important local or regional events.

But you know what we don’t have a parade for? Penises.

Fortunately, Japan sees a need to celebrate this symbol is male fertility with a parade all its own. Their annual penis festival is a sight to be seen, and something that visitors say they’ll never forget.

Japan is known to be a shy and conservative country, sexually speaking. But one day every year in April, people flock to Kawasaki, Japan for a phallic celebration.

Three huge erect penis statues are carried by chanting men and women dressed in pink as they make their way along the crowded streets towards the Kawasaki’s Kanamara shrine. The feel is much like that of a street party, as everyone gathers around the shrines, takes pictures, chants, and has an all-around great time.

And it’s not only the three phallic shines that celebrate the penis. There are huge wooden penis statues that you can straddle for a fun NSFW picture and a phallic radish-carving contest. Not to mention the seemingly endless penis memorabelia, such as lollipops, water bottles, statues, bottle openers, and more on sale from local street vendors.

So, what is it exactly that they’re celebrating?

According to BBC, Kanamara Matsuri celebrates “fertility, relationships and safe sexual practices, including AIDs prevention.” In fact, proceeds from this event go towards HIV research.

The celebration of fertility starts the evening before the parade. Rice treats made in the shape of the yin and the yang are served, with the yin representing female energy and yang male energy. The following morning, a large bonfire signals the beginning of the festivities, which is when the fun really begins.

After a Shinto ceremony, sake (traditional Japanese rice wine) is served and the omikoshi, the giant pink penis alter, makes its way to the Kanamara shrine. This begins the parade itself, which is met with lots of fun, food, and photo opps.

Every year the penis parade takes place in Kawasaki, Japan near the beginning of April. This is a popular month to travel to Japan as it’s also when cherry blossoms bloom throughout much of the country and festivals spring up all around.

If you want to take part in a fun and phallic part of Japanese culture, book your accomodations in advance to be sure not to miss out on these unique festivities.

And if you find yourself a bit envious of the giant penis alters, don’t fret. You too can have a penis that’s worship-worthy. All you need to do is follow the Phalogenics male enhancement program and you can add three inches to your length in a matter of months. If you want to reach your greatest potential, click here.

By Dorinay Castillo
END_OF_DOCUMENT_TOKEN_TO_BE_REPLACED
Worth reading...
Get Bigger Fast: The Best Penis Sleeves and Penis Extenders for Her Pleasure