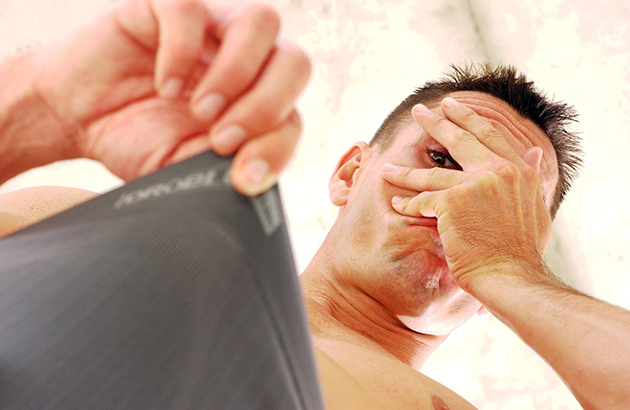 Two weeks ago, Danny Polaris made a choice that he would deeply regret. During a one-night stand with a nurse, he agreed to have his penis injected with an erection-enhancing drug.

Now, two weeks later, the jury is still out as to whether or not he will ever be able to have an erection again. His ongoing ordeal is one that can teach us all a lesson in being a bit more cautious when it comes to how we treat our reproductive organs.

After a night of fun at a Berlin nightclub, Danny left with a man who claimed to be a medical professional. Danny was prepared for a night of fun, and as such, had already taken Viagra.

His hookup then suggested an injectable erection-enhancer. As reported in an interview with GCN, Danny wasn’t sure if he really needed that double dose. But he figured, “what could possibly go wrong? He’s a medical professional, he knows what he’s doing.”

Well, you can’t trust strangers to make good decisions for you.

That was Friday night. On Saturday, Danny was still rock-hard. He decided to ignore it unless it lasted through the weekend (per doctor’s orders), but by Sunday, things were getting uncomfortable.

He then turned to his sexual rendezvous for advice. The advice he was given? Take ketamine, a horse tranquilizer and recreational drug, for relief. Surprise, surprise…things got much worse. He was rushed to the hospital later that day, feeling like his penis might burst.

Doctors and Surgeons Do What They Can

Danny’s condition is known as a priapism, which is a long-lasting erection that results in pain and sometimes permanent damage. According to his friends who set up a GoFundMe page, his 10-day priapism was “potentially life-threatening.”

In an attempt to deflate his erection, doctors used needles, inserted a 7-inch plastic screw into his shaft, and transplanted a vein from his leg all to allow blood to drain from his penis. None of these attempts have been fully successful.

During this time, Danny has been in excruciating pain, sometimes so intense that he would black out. He has been doing his best to stay positive, but he does fear that he won’t be able to use his penis again.

Many of us think that medical professionals can fix the questionable things that we do to ourselves. While it’s a good thing that Danny has had such great medical care, the fate of his penis is still unknown.

Why Did This Happen?

Want To Be Better In Bed?

Many men with penises that function just fine take erection enhancers not just to last longer, but also to maximize their erection potential. The extra blood flow can moderately boost both penis length and girth.

But there are safer, and more effective, ways to do that. If you find yourself tempted to take questionable medications or inject drugs into your dick to make it more impressive, why not try something safer first? The Phalogenics plan is an exercise plan that has been proven to boost the length of your penis by up to three inches! That’s much more impressive than the meager ½ inch or so offered by erection pills. If you’re ready to reach your full potential, click here.

By Dorinay Castillo
END_OF_DOCUMENT_TOKEN_TO_BE_REPLACED
Worth reading...
Can Meditation Lead to Rock-Hard Erections?