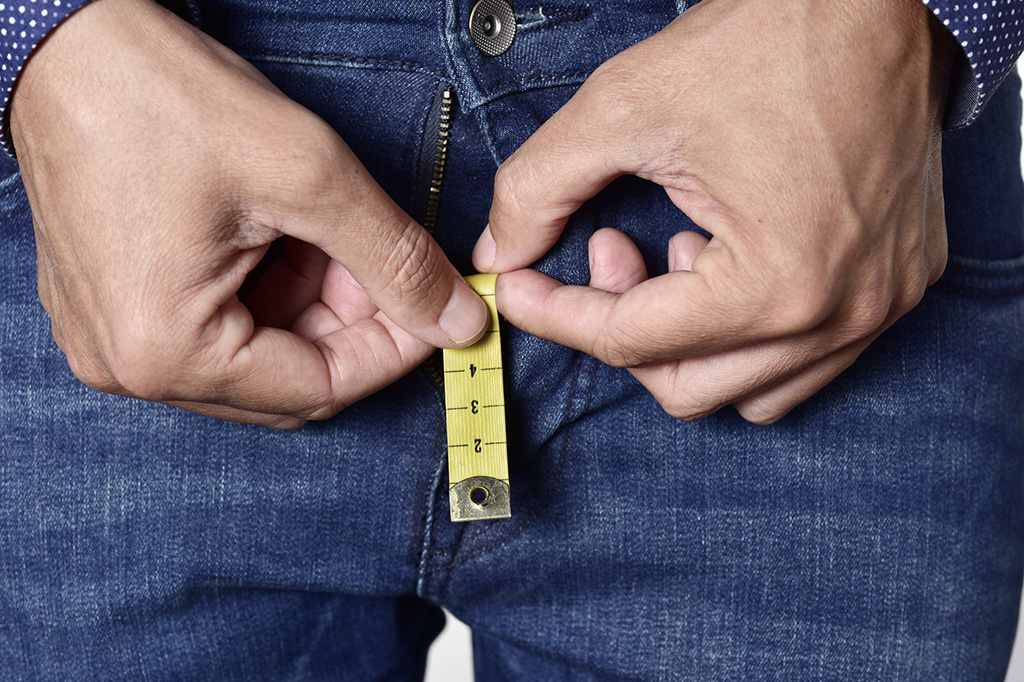 There are a lot of theories about what determines penis size. People think feet and hand size play a role, while others claim it has something to do with the size of your nose.

The reality is much simpler, though, and much more intuitive than people try to make it out to be. In this piece, we’ll take a look a the real determining factor in penis size, as well as touch on a few of the popular myths circulating out there.

Want to know how you can really tell how big someone’s penis is? Keep reading, and you’ll find out.

This myth is a bit more obscure than some of the others out there, but it persists nonetheless. People in some countries believe that a big nose is the mark of a big penis, but that doesn’t pan out for most people in the long-run.

It might be an unfortunate reality for some who wanted to leverage a big nose into more sexual interactions, but this is the reality of penis size. There is no factual relationship between the two.

He has big feet. You know what that means, don’t you? Big socks.

If you were to ask 100 random people on the street about what determines penis size, 80 of them would probably site hand or foot size. This is one of the most popular misconceptions about penis size out there (penis size by race).

The idea of foot and hand size determining penis size is so widespread that research has weighed in on the topic. So, what did they find when studying the correlation between foot size and penis size?

The answer: virtually nothing.

Sure, there are some cases where an abnormally large man is going to have large feet and a large penis, but that doesn’t mean it’s the case for everyone. Research has shown that there is very little to no relationship between the size of a man’s feet and the size of a man’s penis.

So what really determines the size of a man’s penis? Well, the answer boils down to the simplest conclusion: genetics.

Penis size is largely hereditary, and there doesn’t appear to be a correlation between the size of a man’s penis and the size of anything else on his body.

There does seem to be a relationship between overall size and penis size, but this is to be expected. If someone is larger on average then they should have larger body parts than those of average size.

We can see this correlation in the average penis size by country. Countries with taller and larger men typically also dominate the penis size comparison.

The reason penis size is so important to men is that they think women prefer a large penis. If men thought women liked the smallest penises out there, then no one would be inquiring about how to increase penis size.

It seems that men tend to overestimate what women want regarding penis size. Men might want to be as big as possible, but that wouldn’t necessarily satisfy a woman.

Based on testimonials, most average women don’t want a hulking penis in bed with them. They prefer average and above-average penises, and some even prefer below-average penises on their men.

Most of the time, women just want a positive sexual experience. Men with small and large penises alike can deliver an orgasm if they know what they’re doing.

Size isn’t insignificant – it does play a role. The adage is true, though: size isn’t everything. Technique plays much more of a part than penis size, even if you gain a few extra inches using male enhancement techniques.

Be Careful What You Wish For

It’s common for men to want to have a large penis. Big penises represent power, pleasure, and the ability to satisfy a woman.

This might be the pornographic ideal of today’s age, but it isn’t the truth – at least according to women who have encountered these “monster dongs” in the wild.

Women repeatedly report that, while an above-average penis is great, the biggest ones out there are more of a hassle than anything else.

There are, of course, benefits to having an above-average penis. Those with below-average penis size often dream of having a large penis one day, and there are some natural and surgical remedies that will bring the size of your penis to (or above) the global average.

In reality, though, you shouldn’t dream of having a penis that falls on the upper end of the scale. Women seem to prefer a below average penis over one that intimidates or even hurts them.

Temper your expectations when it comes to male enhancement. Don’t try to shoot for an illogically large penis. Men with penises this big offer stories of displeasure that rival those of men with small penises. Be careful what you wish for here.

Out of all the myths and theories about penis size, the only realistic explanation for what determines penis size is genetics. Unfortunately, there’s no way to tell what’s in a man’s pants until you look for yourself.

There are all kinds of penis types out there. There are the showers, who have sizeable flaccid penises, there are the growers, who start small and grow bigger when erect, and there’s everything in between.

Foot size, hand size, and nose size have nothing to do with how big a man’s penis is.